Readers – Please note that listed prices are accurate at the time of posting and are subject to change. Availability and prices may differ from country to country.

Authors – If you would like your book(s) to be included in this daily listing, please click HERE

Please be aware that Today’s Sponsor may not always be free.

Anya Michaels is having the time of her life. She has the man of her dreams by her side. She has graduated at the top of her class. She has the job others were lining up for. Between late night drinks at her favourite bar and fancy dinners at the most expensive restaurants, she has a string of adoring friends. Everything changes when she hears the dreaded words, “You are sick.”

Being diagnosed with a rare neurological disorder, her world starts to fall apart, one piece at a time. Now dumped, her four year relationship is nothing but a memory filled with pictures, thoughts and a very broken heart. Her job becomes an even further challenge as she tries to hide her condition. Her friends suddenly have more important things to do, what is a party without a party girl? Perfect could not crumble any faster.

Soon, caught between situations, people and pieces of life that she never dreamed of planning for herself, Anya begins to wonder if her brain condition is all that bad. As she absorbs the changes in her life and realization sets in, she begins to wonder if she is the only one saying: Excuse Me, My Brains Have Stepped Out.

Demetrius makes his first mistake when he lets his best friend Halcyon marry Eleyna, the love of his life, without saying a word. On the day of the wedding, he walks away from the Elencheran town of Dove’s Meadow and joins the army.

He makes his second mistake when the pirate Black Iris tricks him into letting dozens of men, women and children die in a fire. Demetrius is imprisoned in grief and disgrace.

But he can atone. The Black Iris is dead. The Ivory Rose has risen to the top of the pirates and is leading brutal raids on the coast. If Demetrius can capture and kill her, he’ll win his pardon.

And then Demetrius discovers the Ivory Rose is Eleyna. He must decide which will be his third mistake: losing his last chance at a pardon or destroying the one woman he’s ever loved. 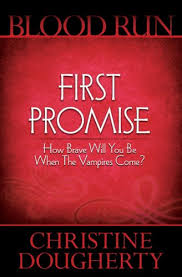 It is 1985 and the United States is reeling from a disease that has taken huge, bloody bites out of the country as people are changed into vampires. The survivors have grouped together in remote outposts and the National Guard is the lifeline that runs between the outposts, bringing news and supplies.
In Wereburg, New York, a young woman named Destiny Riser has lost her parents in the plague but saved her little brother, Chance. But the outpost she brings him to is still young and learning and in an accident of fate, it is ravaged by vampires. Destiny sees her brother bit and changed and from that moment on, rechristens herself ‘Promise’ and vows to release Chance from his nightmare, nighttime existence.
With the assistance of her black horse, Ash, she combs the barren forests surrounding Wereburg and even her old development, Willow’s End, searching for Chance; desperate to end his misery. But then the National Guard brings a stranger to Wereburg, a man who is purportedly a fabled ‘half and half’–someone who has been bit but who has at least a partial immunity to the disease. That man will change everything that Promise believes.

Newspaper reporter Jonie Waters thinks the story she’s covering is bizarre. Even so, she’s not prepared for the shock of finding a corpse in a trunk beneath the floorboards of a house. She dashes from the grim discovery and calls the police. But by the time alluring detective Daniel Wyeth arrives on the scene and reenters the house, the trunk and its contents are missing!
With the police and her newspaper coworkers questioning her credibility, Jonie makes tracking down the body her mission. She won’t let anything get in her way, not even distractions that include covering a series of newspaper articles with her old flame, interacting with her dysfunctional family, intercepting a mugging, and surviving a round of mud wrestling.
Silver Flashing is the second novel in the Jonie Waters Mystery series by Amazon bestselling mystery author Tamara Ward. Action and light romance combine with engaging characters and humor for a page-turning whodunit set in Wilmington, NC.

The opportunity to reach a wider community and customer base, grow your network and to stay abreast of social media trends is key to driving success. This can also however be a confusing world where new networks and fads are literally springing up daily. It can be tempting to join an overwhelming number of social media sites without any real idea of how to make the most of your online presence. While most of these platforms are valuable to your brand, it is essential that you know how and when to use them effectively for maximum return.